Black Sabbath are an English heavy metal band, formed in Aston, Birmingham in 1968 by Ozzy Osbourne (lead vocals), Tony Iommi (guitar), Geezer Butler (bass guitar), and Bill Ward (drums). The band has since experienced multiple line-up changes, with Tony Iommi the only constant presence in the band through the years. A total of 22 musicians have at one time been members of Black Sabbath. Originally formed in 1968 as a heavy blues rock band named Earth and renamed to Black Sabbath in 1969, the band began incorporating occult- and horror-inspired lyrics with tuned-down guitars and achieving multiple platinum records in the 1970s. Despite an association with occult and horror themes, Black Sabbath also composed songs dealing with social instability, political corruption, the dangers of drug abuse and the often apocalyptic prophesies of the horrors of war.

Black Sabbath are cited, along with Led Zeppelin and Deep Purple, as pioneers of heavy metal. The band helped define the genre with releases such as quadruple-platinum Paranoid, released in 1970. They were ranked by MTV as the "Greatest Metal Band" of all time, and placed second in VH1's "100 Greatest Artists of Hard Rock" list, behind Led Zeppelin. Rolling Stone has posited the band as 'the heavy-metal kings of the '70s'. They have sold over 15 million records in the United States alone[8] and more than 70 million records worldwide. Black Sabbath were inducted into the Rock and Roll Hall of Fame in 2006, and were included among Rolling Stone's list of the 100 Greatest Artists of All Time.

Vocalist Ozzy Osbourne's heavy alcohol and cocaine usage led to his being fired from the band in April 1979, after which he began a very successful solo career, selling more than 55 million albums. He was replaced by former Rainbow vocalist Ronnie James Dio. After a few albums with Dio's vocals and songwriting collaborations, Black Sabbath endured a revolving line-up in the 1980s and 1990s that included vocalists Ian Gillan, Glenn Hughes, Ray Gillen and Tony Martin. In 1992, Iommi and Butler rejoined Dio and drummer Vinny Appice to record Dehumanizer. The original line-up reunited with Osbourne in 1997 and released a live album, Reunion. The 1979–1982 and 1991–1992 line-up featuring Iommi, Butler, Dio, and Appice reformed in 2006 under the moniker Heaven & Hell until Dio's death on 16 May 2010.

On 11 November 2011, the original band members announced that they were reuniting and recording a new album. The band are scheduled to play at Download Festival in 2012, followed by a world tour. 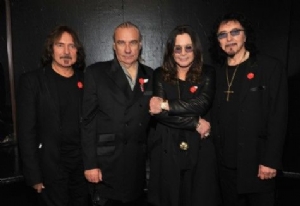