Solefald Finally Playing Live with In Vain as Crew!

On September 15th 2012, Solefald will make their live debut at the Southern Discomfort festival in Kristiansand, Norway. Solefald are also set to play the Inferno Festival in Oslo in the Easter of 2013. Fronted by Lazare and Cornelius, the Solefald gunboat will feature avantgarde deathsters In Vain as live crew, a lethal lineup capable of rendering all the nuances of the Solefald discography. 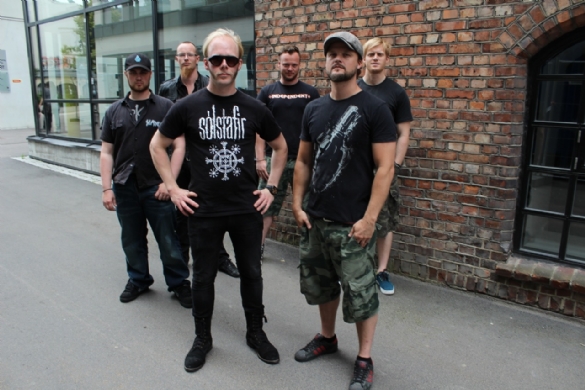 Solefald are currently writing their eighth studio album «Kosmopolis», scheduled for release in the Fall of 2013.

In 2011, In Vain proposed doing a joint tour with Solefald, stepping in both as support act and live crew of the two infamous Norwegian eggheadbangers behind classic albums such as «The Linear Scaffold» and «Neonism» and «Norrøn Livskunst». The 2012 shows will include both progressive items from Solefald’s last epic albums as well as furious pieces from the band’s beginnings in 1997 and onwards.

Solefald and In Vain are currently looking for live gigs and tours in 2013:

Since their inception in 1995, Solefald have contributed to the diversification of extreme metal with an unbroken succession of albums. Arguably one of the most critically acclaimed acts of avantgarde black metal, no concept or instrument has been too weird for the Norwegian duo who branded their initial style “red music with black edges”. In 2009, Solefald's debut “The Linear Scaffold” was ranked #30 in Terrorizer's top 40 black metal albums. The 2010 offering “Norrøn Livskunst” was nominated for a Norwegian Grammy award.

After a decade with demands for Solefald concerts, it is about time to bring the band's classics home to the fanatics.

In Vain was formed in 2003 and released 2 EPs before signing with Indie Recordings in 2006. In 2007 the band released their debut album "The Latter Rain" which received brilliant reviews from a united metal press. The same year In Vain toured Europe together with Vreid and Battered. "Mantra" was released in January 2010, and received amazing reviews as well. Rocksound Magazine UK wrote: "One of the most compelling, absurd and utterly brilliant progressive metal releases since Opeth’s "Watershed". (9/10)". Following the release of Mantra In Vain did their second European tour, played several shows abroad and supported Keep of Kalessin on their Norwegian tour.

Reviewers describe In Vain as progressive extreme metal, however the band is very hard to pinpoint and have a totally unique sound.